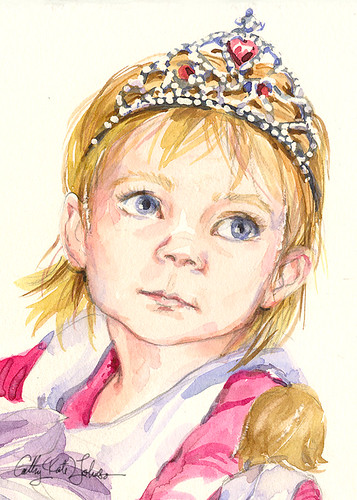 Sunday, I got to attend the birthday party for my beloved youngest godchild, Birgitte, whom I've drawn and painted often. Her two best friends were there, and I sketched like mad!

There was no time to do anything but work in pencil and take photos, so yesterday I added color, in watercolor. I decided since I was working on the book for North Light, I'd do step-by-step shots of the process--and share a detail of my montage here. First, I sketched the pensive little face with an HB mechanical pencil to try to catch a likeness.  I love working with this pencil and its soft eraser--I can adjust and change without damaging the paper.  I just blocked in the shape of the tiara, and obviously worked hardest on the eyes, since they'd make or break the painting.  I punched up the scan a bit so you could see the pencil lines better...

I keep relationships in mind, and measure one shape against another.  Like me, Fiona has a long upper lip, especially when she has a sober look on her face, so that was essential for likeness.  (Hooray for that eraser!) I used a Masquepen to suggest the shiny "diamonds" on her tiara, and laid in the first pale washes for her skin, with a large round watercolor brush.  I used quinacridone red, a touch of cadmium orange, and a tiny bit of ultramarine in the shadows, and kept the values light. I added the first wash in her eyes, a grayed blue of ultramarine with a bit of burnt sienna, and began her spiderweb-soft hair with quinacridone gold and raw and burnt sienna.  I'm still using the large round brush here--it has a good point but holds a lot of paint.  The liquid mask, once thoroughly dry, allows me to paint right over it so I don't have to worry about saving lights. I began laying in simple washes of quinacridone red for her hot-pink t-shirt, and further developing her eyes and the shape of her face.  Shadow shapes are still quite pale, on a little-girl face, but their shapes help capture the likeness. I added a couple of the jewels in her crown. Finally, I developed the shadows further, on her face and her white satin bodice, using a soft mix of ultramarine and quinacridone red, paying attention to the folds in the fabric.  A stronger mix made the shadows in her t-shirt.

I removed the dried mask and added detail to the tiara, then worked a bit more with her eyes.  I'd protected the sparkle with liquid mask, too, so once I'd painted the pupils with a strong mix of ultramarine and indigo rather than black, I removed the mask and let the shine come through!  I kept her lashes soft and paid careful attention to their direction--that helps the eye to look round.  The whites of the eyes needed to be modeled a bit, too, with a very pale blue wash--it doesn't show ell in the scan...

I'd gotten her left eye too big and her ear on that side a bit too small, so I lifted color from the ear with a small, stiff brush and repainted the details.  The eye was easier--it DID look bigger in the photo I was working from for this one, but all I needed to do was close in the darks a bit and it wasn't disturbingly so!

This is not QUITE finished at this point, but I'm going to set it aside and get some perspective on it!

Fiona is normally anything but shy, but Sunday she was ambivalent about the whole thing. All three little girls had tiaras, and all were seated at the main table, just for girls, complete with balloons and a cake shaped like a castle. The plates were heart-shaped and bore images from Cinderella, which Birgitte's just discovered.  She's entranced!

Birgitte and her other little guest dived right into the cake when it was cut--Birgitte had icing ALL over her face and hands and managed to get not a drop on her clothes, as you can see here... 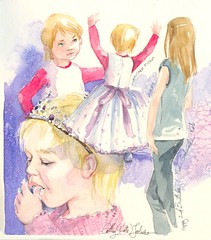 But Hurricane Fiona was suddenly shy.  She was more interested in the wrinkles she could pull in the tablecloth, but mostly she just looked down.  Her mama tried to feed her some birthday cake, but she refused.  Susan, Birgitte's mom, tried next, and still Fiona wasn't having it.

She kept peeking at me throughout, so finally I sat down next to her and asked if she wanted me to feed her.

So I did.  The face above was right before I figured out what she wanted...

all images copyright 2008 by Cathy Johnson